Is Task-Juggling at Work OK? 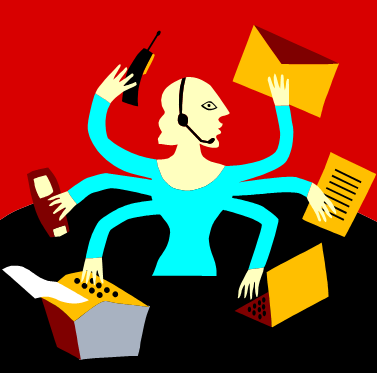 In the heyday of multitasking, it was common to brag about answering email, writing a report all while in a meeting about the latest sales numbers. But today, multitasking has plenty of detractors, and for good reason. We now know that focusing on a single task, not juggling two or three, decreases stress and increases productivity exponentially. However, in many jobs, including production, assembly line, administrative, even managerial jobs, employers consider multitasking an asset. And in certain positions, i.e.  Reception, Front Office, or Customer Service, constant interruption and switching gears is simply part of the job. These mixed messages can have employees asking, when it comes to workplace multitasking, exactly what’s acceptable and what spells job disaster?

What’s Your Multitasking Profile?
Multitasking Maven. If I’m not texting, emailing, walk-talking to a lunch meeting while on hold with tech support, call the authorities – space beings have taken over my body.
Not Now, I’m Chunking: For at least 15 minute intervals, I’m immersed. Except for the phone – hey, it could be important.
Do Not Disturb. Zen-like periods of focus are the only way I get my work done. All my calls go straight to voice mail.

Ready to get started?

I have been working with Bonney Staffing for a number of years and found them to be excellent in filling our contract labor needs. Quick response in filling needs, super … Read More »